Kazuko talks about her plans for the day

Watch the video of Kazuko talking about her plans for the day. What aspects of her speech are clear for a listener?

Watch the video again. What do you notice about the way she says the following words?

Kazuko is well on her way to greater intelligibility. Her pronunciation is clear in general, particularly vowel sounds, for example /ɪə/ /əʊ/ and /aɪ/. We can hear this when she says the words ‘here’, ‘beer’, ‘go’ and ‘my’. We can also hear very clear consonant sounds in the words ‘Spanish’, ‘practise’, ‘but’ and ‘can’t’.

However, there are some unclear consonant sounds, particularly /l/ and /r/. Can the lack of clarity here cause potential misunderstandings? Not so much. However, there is a case for some words not being understood. Let’s analyse the occurrences of /l/ and /r/.

‘Will’ – the /l/ is unclear but can’t really be confused with another word. It could cause problems for a listener, though.

‘After’ – the /r/ is unclear, but again no potential change in meaning.

‘Friend’ – /r/ is sometimes clear, but sometimes not throughout her talk. It seems she has been exposed to the sound, especially as she is studying Spanish.

‘Restaurant’ – /r/ becomes /l/ here. This is a clear example of swapping the vowel sounds.

‘Drink’ – /r/ unclear in general. No potential meaning change, but it lacks clarity; therefore a potential listener might not understand it.

In general there isn’t much potential meaning change with the unclear /l/ and /r/ sounds, just a little lack of clarity. As teachers we can help Kazuko understand how these problem sounds are made physically, become more confident with their production, and therefore help make her pronunciation more effective.

In our previous post, Glynn Talks Spain, we used the cycle below to show you how to work on learners’ listening skills. 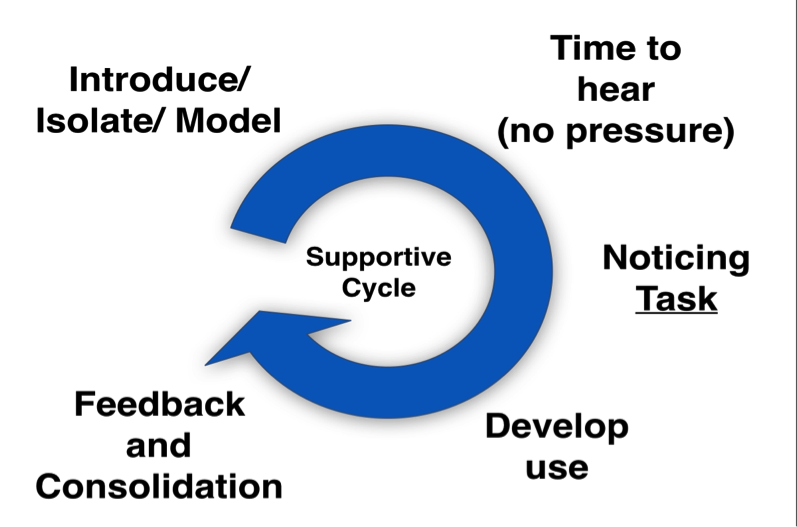 This post is going to show how the above cycle is flexible and can be used to help teachers meet the needs of different learners. We are following the same steps but taking a different starting point. Below, we explain why!

Step One: Feedback and Consolidation

Speaking activity – Kazuko is at a level where she could benefit from recognizing her strengths and identifying an area to work on. We can use the cycle to do this.  We could start with a speaking activity like a shopping role-play with lots of /l/ and /r/ items on the shopping lists. We have assumed this difficulty therefore have included opportunities to use these sounds in a communicative activity. We want to highlight a need for intelligibility during the following stages.

We know that our students have already mastered certain sounds. They are moving towards greater intelligibility, and we want them to know that too. This stage should clearly do that in the teacher’s feedback. Start by writing up good examples of pronunciation on the board and praising the student. Then, we can bring in the /l/ and /r/ problems.

We now want Kazuko to be able to hear her pronunciation of /l/ and /r/. There are different ways we can do this. Recording the student and comparing to another model is one method. We could write some words on the board with the target sounds in them and we record them and then ask Kazuko to record herself saying them. She then listens and compares. We don’t want to discourage her here, but it is important step in the cycle. The zero technology model would mean that the teacher as the model becomes very important to this stage. Here we can model the word with the target sound and ask Kazuko to repeat and compare. Students should be encouraged to self or peer analyse sound production during this stage.

We really want to get into the physicality of the sound here, much like a good session at the gym. Firstly, Kazuko needs to know how the sound is made, so she needs information on what speech organs are used, what the speech organs do exactly, what position they are in at the beginning and end of the sound, whether there is a constant airflow or a stop etc. Diagrams can be used to allow her to see inside the mouth and what parts you are referring to. However, she still needs to do the physical work to notice how the sound is made. As we said in our previous post, IATEFL 2017 from a Pron Perspective, Adrian Underhill presented us with ‘embodied pronunciation’. The idea is that students need to connect with the organs and muscles that matter. We can help Kazuko make the sounds physically and also help her realise what is happening as she makes them.

Let’s take /l/. The blade of the tongue touches the alveolar ridge, for a student that’s the raised part just behind the top teeth. Air flows around the sides of the tongue and the voice is used as the air flows, as this happens the tongue falls from its original position and moves to lower part of the mouth. We can ask Kazuko to do this with us. Ask her to tell us what is happening inside her mouth. This will help her understand the sound physically and also make us aware if she has problems. We can guide her if this is the case. Now move on to /r/. The tongue is just behind that raised part behind the mouth (alveolar ridge) this time, but not touching. The sides of the tongue are touching the upper back teeth (molars). As you we do this, there is a constant airflow and the voice is used. Again we ask Kazuko to explain what is happening in her mouth as she makes the sound and check that she is able to do it. Now we can change between the sounds – /l/ then /r/, back to /l/ then /r/ again. Ask her to explain the difference between the two sounds. Can she feel the physical difference? We can do this as many times as we feel necessary to give her a good understanding of what is happening physically.

Step Three: Develop Use through drilling and pair work

Now that she has a better understanding of the physical aspects of the sounds, we want to develop this further and give her plenty of opportunities for controlled practice. We can now introduce words with the target sounds and drill them – listen and repeat. First words with /l/, then words with /r/. To add variety and challenge we can mix the words to give her practice with both /l/ and /r/. To add more variety, give her freer practice, and to keep it going without boring her, we can use pictures to represent the words. We show a picture and she says the word. We can also use the pictures to change the drill to silent mouthing of the words; this can put the focus back on the physicality. We can then go further and change the drill to a mumble drill, and then back to full public voice drilling. We can also build the drilling up to include phrases or short sentences. The important thing is that we give her plenty of varied controlled practice drilling to help her become more confident with the sounds.

With a group of students we could move on to a further controlled practice stage by asking them to drill each other. We can give each student different word lists or pictures and ask them to drill each other and then give feedback on sound production. We can also create short dialogues containing words with the target sounds and ask them to act them out together. For example, if our speaking activity is a shopping role-play, then the dialogues will be based on shopping situations. Plan time for them to comment on their sound production at the end.

Step Four: Develop Use and Give Feedback and Consolidation through another speaking activity

Kazuko repeats the same speaking activity from the first stage. This could be done as a pair work or mingle activity with a group, but it can also be done as a one-to-one with the teacher. At this stage we want to give her another chance to complete the original activity, but this time with more confidence and more effective pronunciation. To add challenge, more authenticity, and motivate her to repeat the activity, we can make it goal-oriented. This could be done by giving the activity a more challenging time limit, a tighter budget for shopping, a target to spend as little money as possible while still managing to get the items on her list, or even visit different stalls to decide where the best bargains are. At the very least she will have different items to shop for; items that contain the target sounds as well as others. We want to give her the conditions to become a more effective speaker and allow her to see her progress.  Feedback on the activity is an essential part of allowing her to see her progress or possible room for improvement.

Self-analysis, peer feedback and teacher feedback can provide this. Asking Kazuko to record herself again can help her to see any improvement. We should also encourage her to practise out of class, recording herself saying the sounds in isolation, while looking in a mirror. Then,  saying words with the target sounds in them and then longer phrases with those words in them. We could ask her to write some sentences in class using as many examples of the sounds as possible, while remaining natural, and she can practise these at home.

If she still needs help hearing the sounds and works well by having a model we can record ourselves saying the sentences and then she can compare with her own production out of class. It might help if we make a short video of ourselves saying the sounds slowly to show the mouth position and share that with her so she can correct herself out of class!

Working with the Supportive cycle:

In our previous post, Glynn Talks Spain, we showed how the cycle could be used to develop listening skills with the stages below:

In Kazuko’s post, we are showing how the cycle is flexible. It is not PPP 🙂 We can take different starting points depending on the needs of the learner. Pushing output, feedback and consolidation to the start of the lesson is great for diagnosing learners’ pronunciation needs and for helping learners to notice their pronunciation strengths and getting them ready to work on weaker points! Below is how we have used this cycle in this post. More cycle posts to come to further demonstrate its flexibility!

5. Output (speaking task – repeat of initial task with some variation to enhance interest)